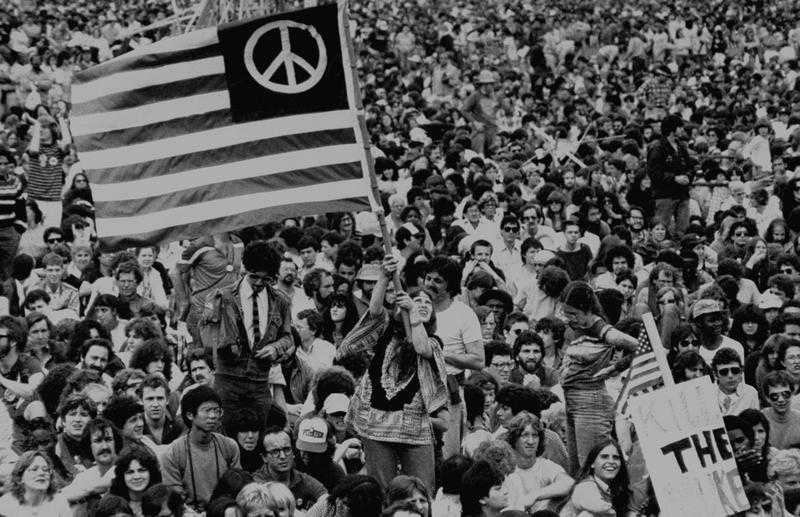 The Museum of New York collections can be regarded as treasures of concrete and eloquent, though little articles that have survived from a wide range of organizations and events in the course of over two hundred years. At its core exhibition, the museum shows a wide-range of documentations of public events, which include public celebrations that commemorate various occasions in the city. In addition to these official occasions, the items capture a wide array of social, cultural and political events, low and high, private and public including nuclear disarmament campaigns that occurred between 1957 and 1985. This post is about the dangers associated with the use of nuclear weapons and campaign strategies that were used to discourage their continued use. This selected object includes documents that were used in campaigns against the use of nuclear weapons in New York between 1945 and 1982.

Through the documents about nuclear disarmament campaigns, the museum manages to exemplify various aspects of the history of New York. The object plays a vital role in discouraging the use of nuclear weapons in wars. The statues, as well as the drawings of images with messages discouraging the use of nuclear weapons, show that the city is rich in artistic skills such as fine arts and stone carving. The object is an article showing a statue of a victim of nuclear bomb radiations. Nuclear explosion raises the temperature of the around hundreds of degrees Celsius. The results in heat flush that vaporizes human tissues. People shielded or within buildings will die because of the heat effects and blast as buildings collapse with all combustible materials bursting into flames. Various individual fires combine into a firestorm as the surrounding oxygen gets consumed. The consequence of these is devious hurricane winds which further perpetuates the fire as fresh oxygen gets burnt. People in the underground shelters who survive the heat flush will die because of suffocation as all the oxygen is sucked from the atmosphere. Outside the region of destruction, the number of survivors increases gradually.

The radioactive fall-out will affect survivors for a couple of days. The degree of fall-out will vary depending on whether the bomb detonates at it falls on the ground or in the air. Cancers induced through radiations will affect many people, often over ten years later. Certain types of cancers like thyroid cancer are associated with prolonged exposure to radiations. Consequently, the children born to those exposed to nuclear radiations are more likely to have abnormalities such as leukemia. Since there is a long period between exposure to nuclear radiations and the inception of cancer, it becomes difficult to any form of cancer to a specific cause. As can be observed from the items from the museum, some of the incidents of nuclear explosions include, the first testing of the nuclear bomb in New Mexico and the US government dropping of nuclear bombs on Nagasaki and Hiroshima that ended World War II in 1945. In response to the incidents, the National Committee for Sane Nuclear policies was founded in 1957, and still exists as Peace Action. Between 1961 and 1963, the Women Strike for Peace and the Cuban Missile crisis and the Partial Test Ban Treaty between the Soviet Union and the United stated were formed. The years 1965 to 1975 witnessed the escalation of the Vietnam War drawing attention from the nuclear disarmament campaigns to a wider antiwar activism. In 1982, the UN session for Disarmament held a demonstration at the Central Park.

A March to Remember is the title of one of the texts about the selected object. According to the article, about a million protesters gathered at Central Park and streamed through Manhattan streets to the UN offices in June 1982 calling for an end to the use of nuclear weapons. That was the time when the use of Cold War arms had reignited. Protesters called for the freezing and disarmament of nuclear weapons as well as funds transfer from the military budget to human needs. The organizing committee for the June 12 Rally comprised dedicated leaders and staff from organizations and groups founded in New York such as Mobilization for Survival and SANE. They got involved in all-encompassing planning with several organizations in New York and beyond. Some of those who led the efforts in anti-nuclear campaigns include Leslie Cagan, who played an active role in LGBT and feminist campaigns, Jack O’Dell who was an African American communist and Coral Weiss, who was a long-time organizer of peace. However, there was a lot of tension whether to opt for freezing or reduce the manufacture and use of nuclear weapons and whether the June 12Landmark March was inclusive.  The sheer numbers of protesters made the day a landmark day in the campaigns for nuclear disarmament.

The initiative that has been taken by New York to display the objects depicting nuclear wars plays very critically in reminding us about the word history regarding the fight against the nuclear war. From those objects people as well as the government can learn from the past mistakes hence prepare well for the future generation. For instance, an object showing the reaction of people who are against the use of nuclear weapons indicates the reaction which may occur in case the governments want to reduce the use of a nuclear bomb.

There are several political impacts which are associated with nuclear war since it always the government which has the political power to protect the citizens. The government will always try to protect their citizens by ensuring the citizens enjoys the best security hence they will have confidence in the government. Therefore, most governments will try by all means to fight against the use of nuclear weapons which may lead to massive destruction to the citizen. Besides, the issue of nuclear may create indifference among countries that may be for or against the use of nuclear. It may further lead to the formation of various allies among various countries which are for or against the use of the nuclear weapon; such allies may lead to war or may create enmity among different countries. For example, currently, North Korea has made enemies with many countries such as North Korea as United State of America due to its policy on the nuclear weapon. North Korea Government has been supporting the manufacturing of very dangerous new clear weapon which may cause dangers to the whole world. Currently, the country has been alienated by many countries making it stand alone in building its economy. Starting with its neighbor country South Korea, it has experience trade restriction thus hindering the country from exporting or importing various goods.

From the above illustration, it is very critical for various countries to come together to fight against the use nuclear weapon due to t its negative impacts on the society. From the story concerning the impact of using the atomic bomb on Hiroshima and Nagasaki should be a bigger warning for countries who want to involve in war. Also, countries need focus on the economic development rather than focusing on manufacturing nuclear which has no major economic benefits since it always cost to manufacture or imports the nuclear weapons. Lastly countries new join anti-nuclear campaigns to wipe away the problems which are associated with new clear weapons.

New York has remained at the forefront of the local as well as global nuclear disarmament campaigns during the 1980s. This was the time when President Reagan began shifting his stance on the manufacturing and use of nuclear weapons, which ended the Cold War. However, the fear of the enormous destructive nuclear weapons mobilized activists in New York as well as many other countries all over the world.